Are you after a light show? Well, this mod will give it to you. Having different light up options with it's blue and red lights firing on every time you hit the fire button! Taking the Steampunk Mod aesthetic to a whole new modern level, the Tesla Punk 220W Box Mod will truly catch your eye with its two transparent panels showcasing some inner gears and cogs. This gear-grinding beauty fires up to 220W and supports the Temperature Control modes.

1. Firstly let us begin with the box mod - Tesla Punk 220W. Place in your 18650 batteries, some charge may be required, you can do this through direct charge from any USB device using your cable provided. Otherwise, you can charge these 18650 Samsung batteries in the charger provided. Watch the YouTube video for greater detail in the previous tab. 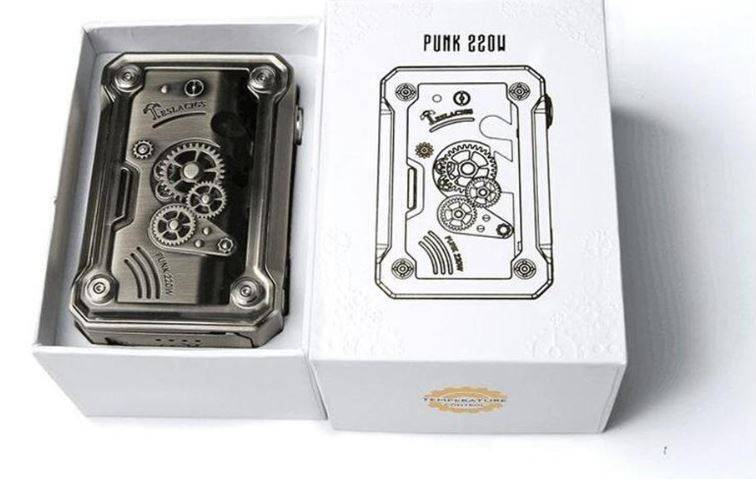 Tesla has garnered a solid reputation for itself in the vaping world thanks to various mods they’ve introduced. Without getting into the details of their previous let’s kick start the review by taking a closer look at the Tesla Punk 220W.

Here too I am going to discard the unnecessary details of the packaging and get straight to what the actual mod really looks like. As evident from the name (or not so evident) the mod makers have drawn inspiration from steam punk genre. The body of the Tesla punk is an amalgamation of zinc alloy, ABS acrylonitrile, and butadiene styrene. The PC transparent cover gives a clear inside view of the machinations of the mod which is further highlighted by a coloured LED installed inside. This provides a finishing touch to the steam punkish scheme which is a delight to behold.

The Tesla mod is substantially heavy and hefty than the previous mods released by the company which gives it a high-quality feeling. The size and the design of the mod is ergonomic which allows it to fit neatly in the palm of the hand. The dimensions are 86X30X56 MM. The mod is powered by 2 * 18650 batteries which need to be purchased separately. The battery hatch is found at the bottom which slides open and fixes in place quite nicely.

Tesla mod is operated by proprietary firmware called Teslacigs. This firmware allows three different temperature settings which can be fixed according to individual preference. The settings are:

And additional user setting which lets user set the temperature as per their liking. Tesla punk is compatible with coils of 0.10 and 3.0 ohms an KA mode 0.05 and 1.0 ohm in TC and TCR.

The performance of the Tesla punk is on par with its looks. The only complaint is that as advertised the mod is not capable of churning out 220W on a dual 18650 power source. At best the wattage can get up to 170W which is pretty good and provides smooth vaping. In TC mode the Tesla punk does a commendable job but there’s certainly room for improvement which might be catered to in the next firmware upgrade (here’s hoping and fingers crossed).

The Tesla punk 220W comes with the standard USB cable and one printed manual, battery safety card, and QC Inspection card. To be honest I was so enamoured by the mod itself that I haven’t paid any heed to the printed material.

Top marks in the looks department! It wouldn’t be far fetched to claim that Tesla punk 220W is by far the most aesthetically pleasing mod I have come across and own. It might be a bit pricey compared to other mods in the same category but it’s a compromise I’ve gladly made. In the performance department also, the mod doesn’t disappoint. TC setting is where it really shines and will lead to some really satisfying vaping memories. Definitely would recommend a purchase and trying it out.